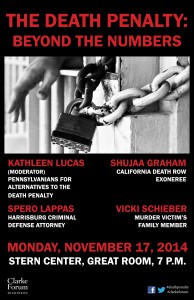 The Death Penalty: Beyond the Numbers

This panel will bring the voices of experience to a conversation about capital punishment. You’ll hear from a man who was exonerated after being wrongfully convicted and sentenced to die; the mother of a young woman who was murdered in Philadelphia; and a criminal defense attorney who has represented defendants in death penalty cases. Reality is more complicated than the statistics can communicate adequately. These are the personal stories of those who have been impacted directly by our death penalty system.

Join the conversation on Twitter with #clarkeforum and #deathpenalty.

The event is sponsored by the Clarke Forum for Contemporary Issues.